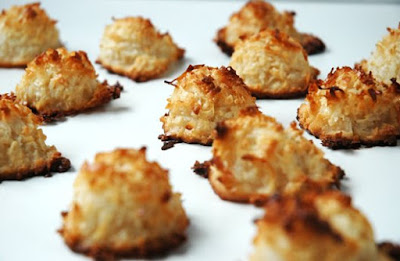 Michael loves coconut so I’ve been talking about making him some coconut macaroons for quite a while. I finally got around to making them and the thing that was so surprising was how easy and simple they are to make…

Preheat the oven to 325 degrees F.

Combine the coconut, condensed milk, and vanilla in a large bowl. Whip the egg whites and salt on high speed in the bowl of an electric mixer fitted with the whisk attachment until they make medium-firm peaks. Carefully fold the egg whites into the coconut mixture.

Drop the batter onto sheet pans lined with parchment paper using either a 1 3/4-inch diameter ice cream scoop, or two teaspoons. Bake for 25 to 30 minutes, until golden brown. Cool and serve.

Recipe modified from the Barefoot Contessa.