When it comes to pies, I’m more of a crisp fan.  I think of crisp’s as the lazy-person’s pie.  So when I got a hold of some stone fruit I thought making a crisp would make a great excuse to photograph.

Photographing this nectarine and plum crisp was really fun.  I’m experimenting with more prop styling and I just happen to have come home from the thrift store with some new props when I decided to bake the crisp—great excuse indeed! 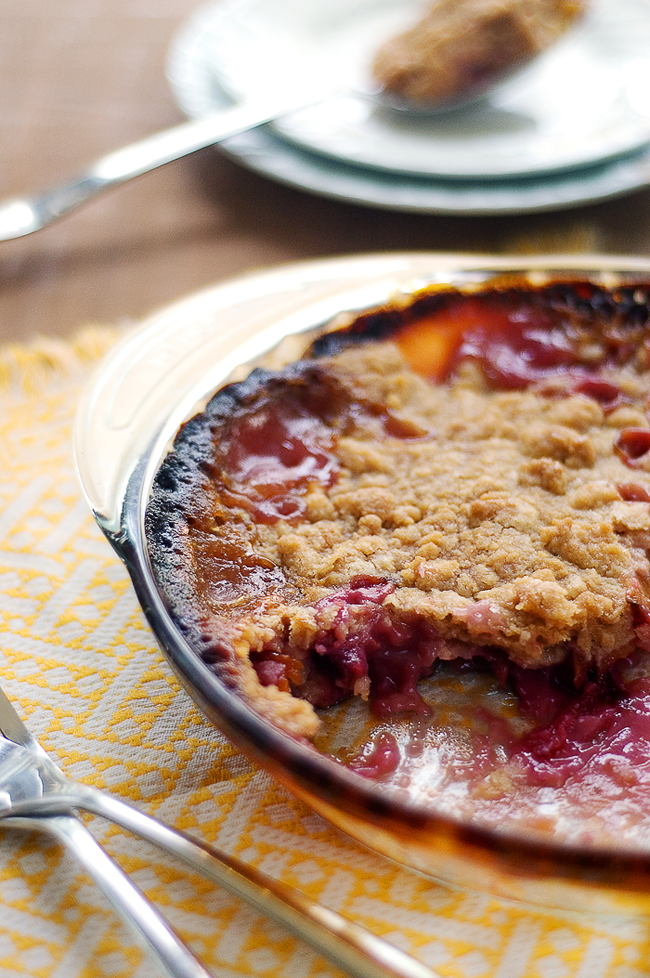 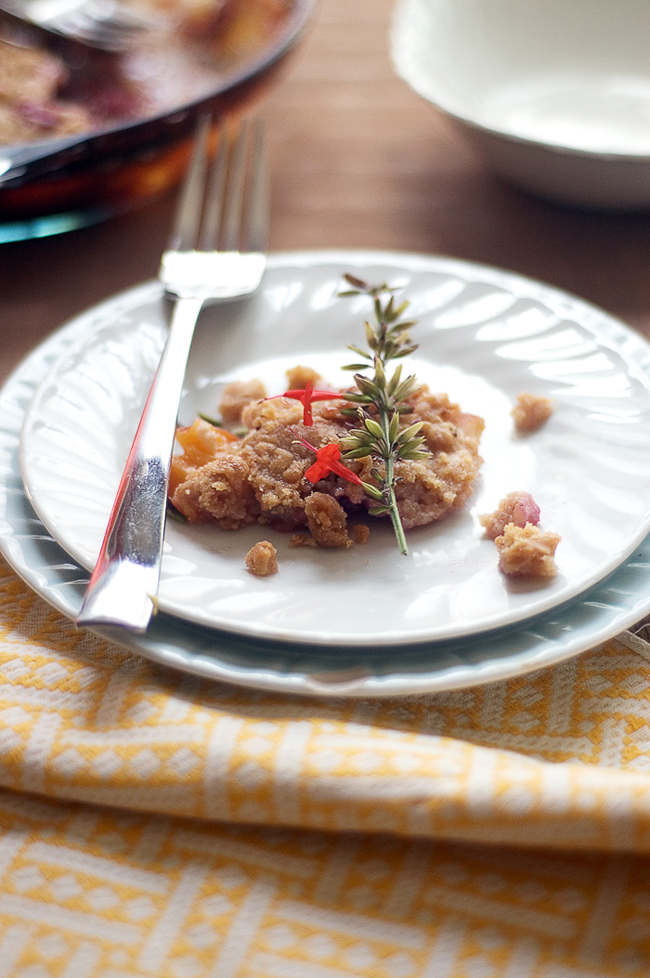 Add all ingredients to a stand mixer and mix until just combined. The mixture should be crumbly.

Mix all filling ingredients in a bowl until well combined. Place filling in the bottom of a pyrx pie plate or square casserole dish. Take topping and crumble on top of crisp until completely covered. Bake at 350 degrees for 1 1/2 hours, or until the top is golden brown. 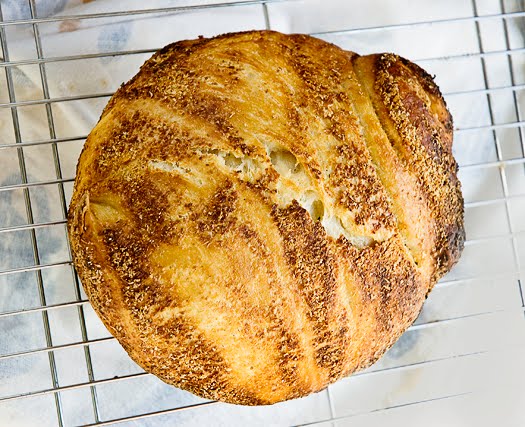 How To Bake Bread On Your Outdoor Grill 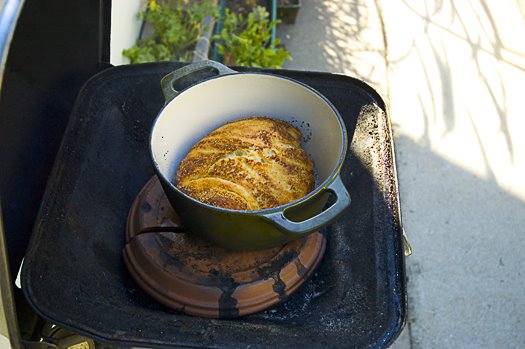 Something happens when Summer hits that makes me CRAZY about baking. As soon as the Los Angeles heat starts rising, I get this wild itch to bake. I don’t know why. It’s my life’s enigma.

The thing that sucks is that we live in a tiny cottage-apartment in Silver Lake, and let me tell you, it’s hot here. Our tiny apartment bakes in the Summer sun…..which means our apartment is even more hot with the oven turned on. What to do?

Bake on the grill, of course! I mean why not, right? I started this little experiment with the New York Times No-Knead Bread because the bread is baked in a cast iron dutch oven. This would be perfect to just pop on the grill I thought.

More on how this little experiment turned out in second part of post..

The bread that emerged, was indeed delicious. But a few things I learned along the way will make an even tastier bread the next time.

Below are the steps I took to bake bread on my outdoor grill:

I used my cast iron Kitchenaide dutch oven per the NY Times directions for the no-knead bread. The dutch oven retains heat and also allows steam from the water in the dough to help form the crust. 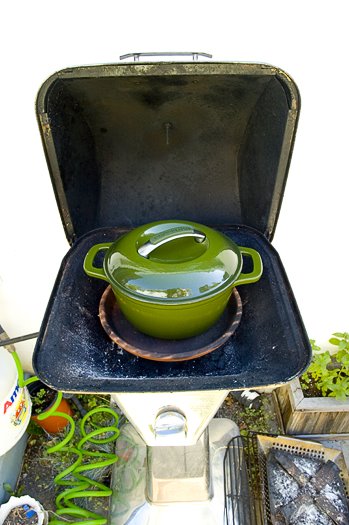 If your grill is big enough to accommodate the dutch oven with the lid on, then you’re pretty much done. My grill is really small, so I had to take the grill off and place my pizza stone directly on the gas burners.

My solution for next time? I think I’m going to try placing an un-glazed terracata saucer on the inside of the dutch oven. That way there is one more layer separating the heat from the bread.

It’s important to have an oven thermometer to have accurate temperatures. My grill already has one built in, so this was easy for me. 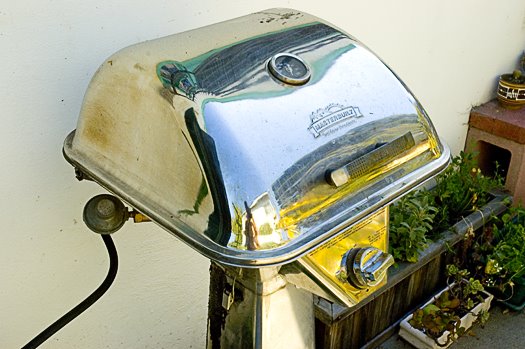 This is CRUCIAL. Follow the NY Times instructions and pre-heat the dutch oven for 30-45 mins before adding the bread. The hot dutch oven is what helps to form the crust on the bread

That’s about it. It really was simple. Again, the benefit of doing this is that you can have fresh baked bread without heating up your kitchen, which is a HUGE plus for me. Anyone have different methods of baking bread on the grill? I’d love to hear about it. I’m making these tonight.  I’m totally intrigued by the blueberry compote that allegedly make these the very best blueberry muffins.  I love me some blueberry muffins, so I can be a tough customer.  I’ll let you know how these turn out. 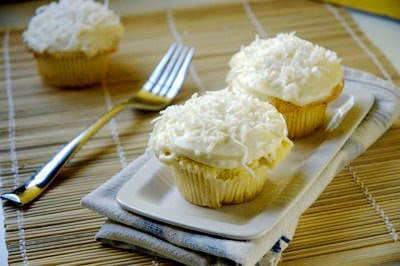 Michael is a huge coconut fan. He just LOVES anything made with coconut. I decided to make him a special treat by making these delicious coconut cupcakes.

These cupcakes are all about the frosting. It’s amazing. Almond extract is the secret ingredient!

For the frosting:
nocoupons

Preheat the oven to 325 degrees F.

In the bowl of an electric mixer fitted with the paddle attachment, cream the butter and sugar on high speed until light and fluffy, about 5 minutes. With the mixer on low speed, add the eggs, 1 at a time, scraping down the bowl after each addition. Add the vanilla and almond extracts and mix well.

In a separate bowl, sift together the flour, baking powder, baking soda, and salt. In 3 parts, alternately add the dry ingredients and the buttermilk to the batter, beginning and ending with the dry. Mix until just combined. Fold in 7 ounces of coconut.

Line a muffin pan with paper liners. Fill each liner to the top with batter. Bake for 25 to 35 minutes, until the tops are brown and a toothpick comes out clean. Allow to cool in the pan for 15 minutes. Remove to a baking rack and cool completely.

Meanwhile, make the frosting. In the bowl of an electric mixer fitted with the paddle attachment, on low speed, cream together the cream cheese, butter, and vanilla and almond extracts. Add the confectioners’ sugar and mix until smooth.

Frost the cupcakes and sprinkle with the remaining coconut.