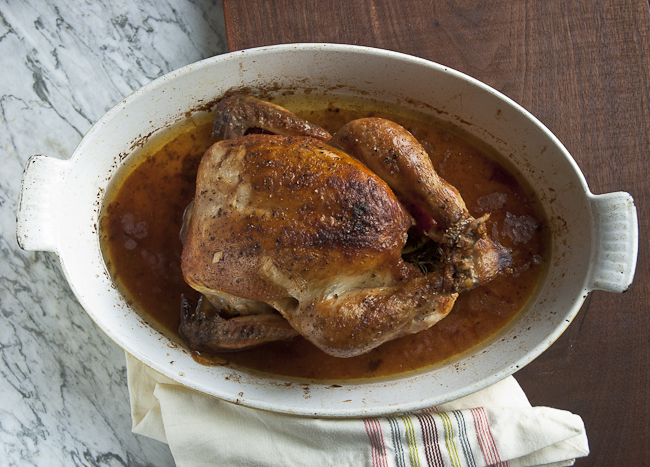 In my house, Sunday’s are for cooking and baking, and there is nothing better on a cold Sunday evening than a roast chicken.  I love roast chicken because of it’s ease of preparation.  It really couldn’t be simpler. 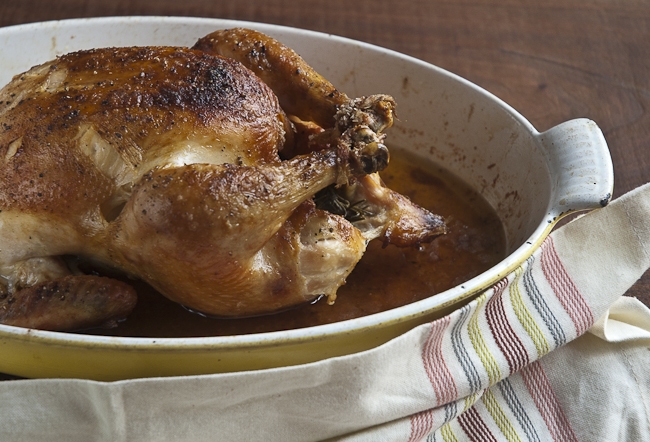 I take an organic chicken and salt it inside and out, return it to its plastic bag and let it sit in the refrigerator for a few hours. Next, I stuff the cavity with bunches of thyme and rosemary, a garlic head, and one lemon, quartered.  Lastly I melt unsalted butter and brush it all over, finishing it off with a small sprinkling of salt and pepper. 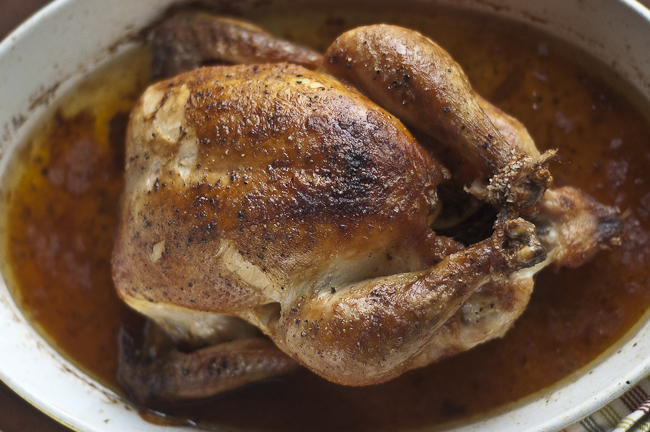 One hour and ten minutes later, my gorgeous chicken comes out of it’s 410 degree oven perfectly cooked and juicy.  There really is nothing better on a lazy Sunday evening.

The Beginnings Of My Fall Garden Crop 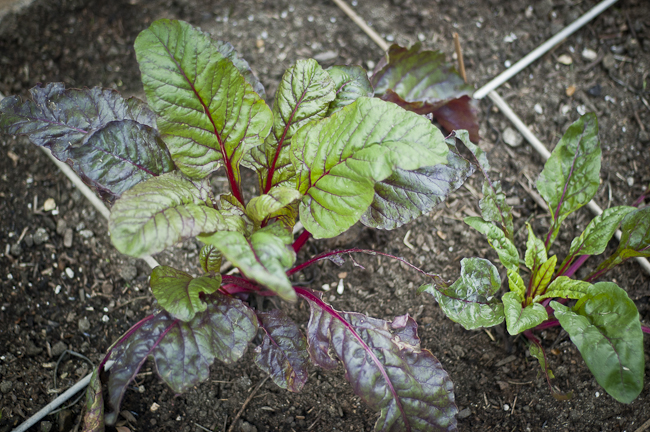 My fall crop is up and going in spite of a late start.  The heirloom Swiss Chard above is a Ruby Red variety that I’ve been quickly braising with butter, garlic, and a little white wine. 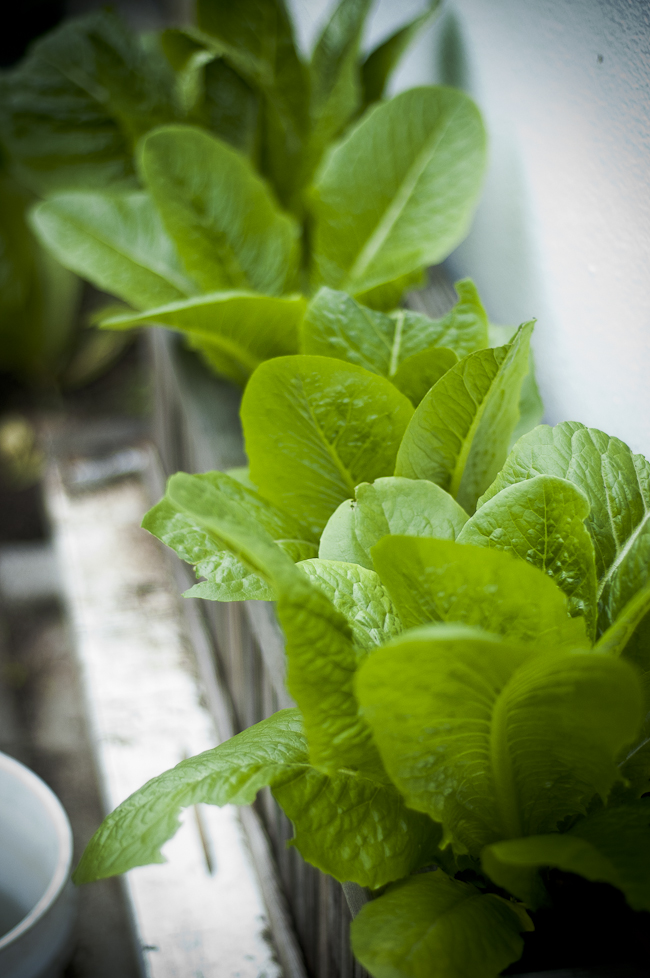 My lettuce crop has been giving me problems this season.  Above are the only successes thus far, an heirloom Parris Island Romaine which is just ready to harvest.  I’ve tried three times now to start other heirloom lettuces but once they sprout they die on me.  I’ve started a new batch so hopefully I’ll have some good news in a couple of weeks. 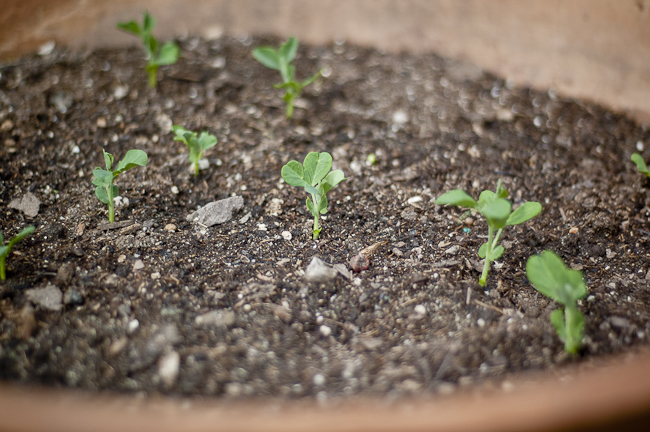 These little ladies above are my heirloom Snow Oregon Sugar Pod Peas.  I’m going to grow them for pea shoots.  I’m delighted that they sprouted and can’t wait to cook them up.  Pea shoots are my favorite!  An omelet with sauteed pea shoots and goat cheese is absolutely divine! 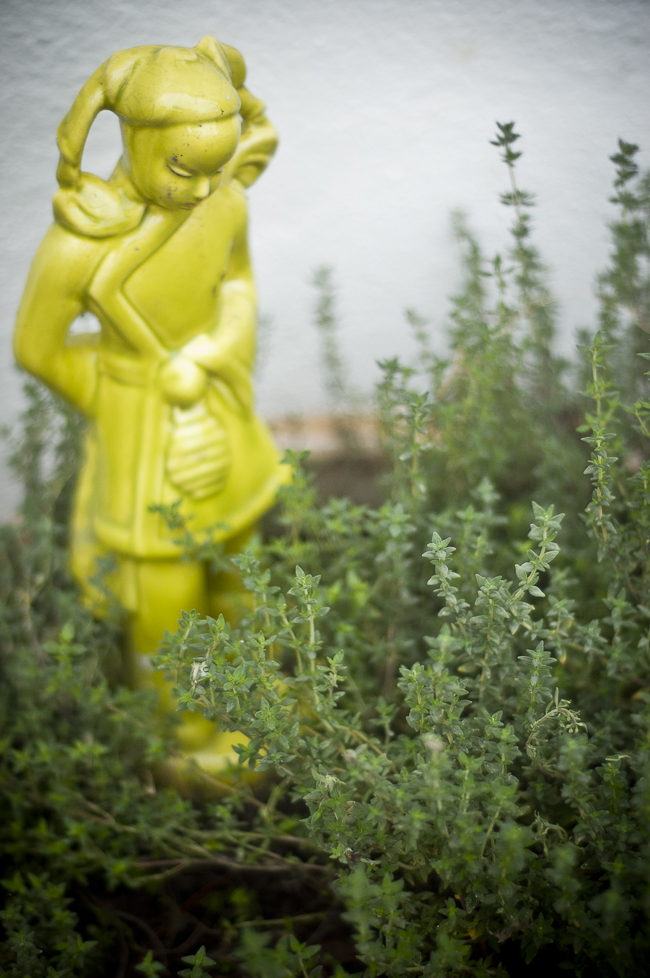 My thyme has been growing like crazy!  I keep it in a pot that is protected by this lovely statue.  I’m in full belief that the statue is what makes the thyme so healthy. 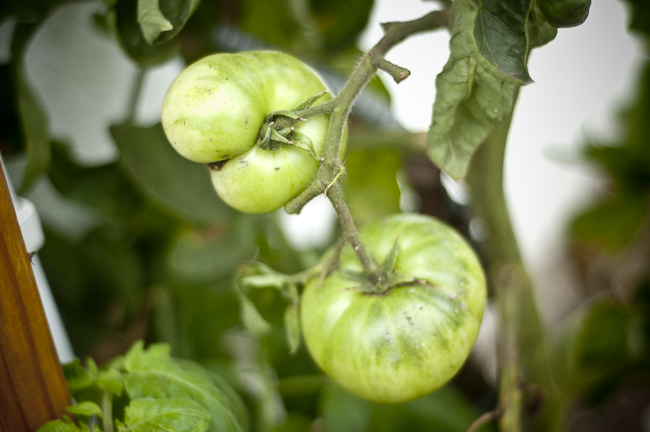 And here are the last of my heirloom Brandywine tomatoes.  The plant keeps growing and producing flowers so I’m going to see just how much more I can get from this plant.  Tomato salad, coming right up!

Beef Stew With Barley and Mushrooms 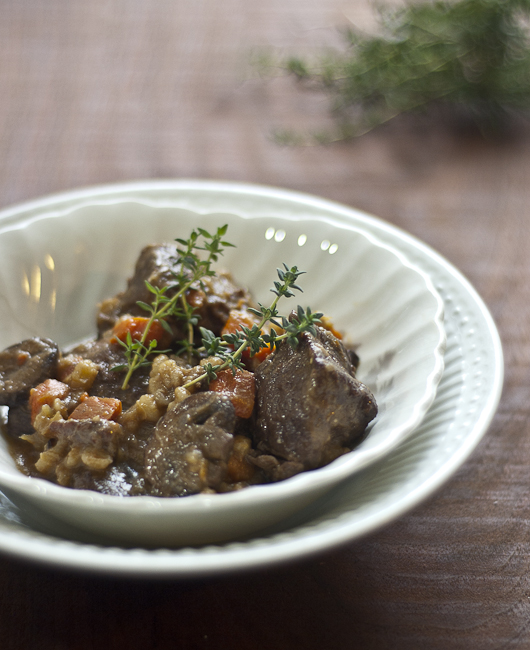 Now that fall is here it’s time for yummy comfort food!  Beef stew is one of my all time favorites and this recipe is truly superb.  I found the recipe over on The Kitchn only I modified it a bit and I think the modifications I made really made a difference. 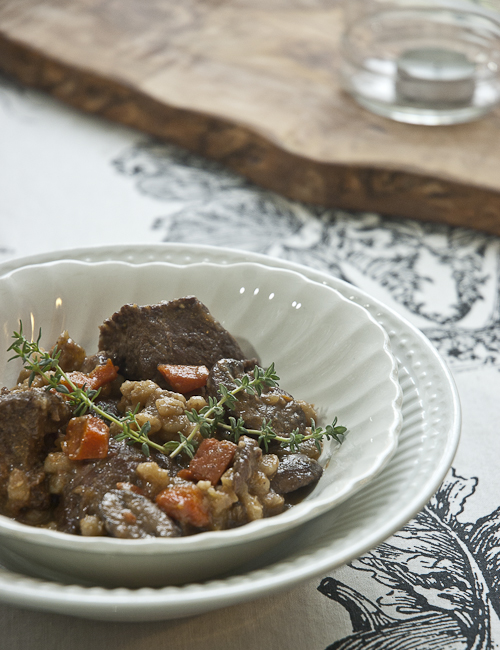 First, after browning the meat I de-glazed the bottom of the pan with some cognac.  This de-glazing added a really rich complex flavor.  Next, I added carrots to the celery and onions and I also omitted the water and just added beef broth.  Lastly, I added about 1 tablespoon of tomato paste to really round out the flavors.  Below is the original recipe, which I think I’ll now use as a basic template for stew. 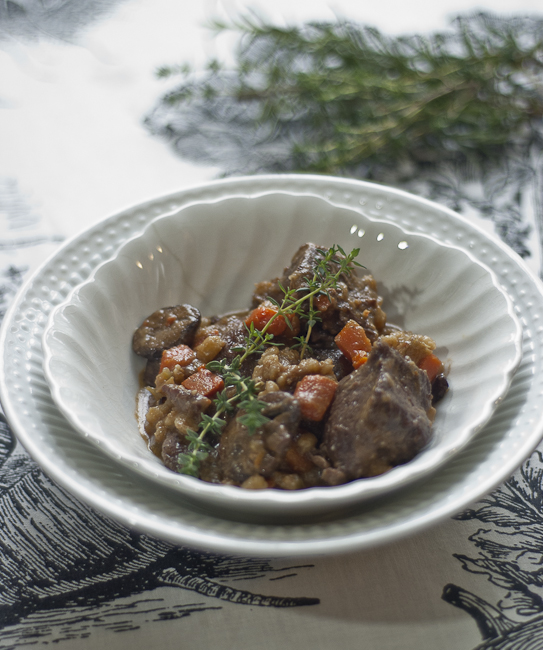 Film the bottom of a large dutch oven with canola oil and set over medium-high heat until the oil is hot. Working in batches, add a single layer of meat to the bottom of the pan. Let it sit for 2-3 minutes until the cubes loosen and are seared golden-brown. Flip the cubes and sear the other sides. When all sides are seared, remove the meat to a clean bowl or plate. Sear the remaining meat in batches. If there is any liquid in the pot after the last batch is finished, pour it over the meat.

Clear a space in the middle of the vegetables and sauté the garlic until fragrant, about 30 seconds. Add the thyme and bay leaf, and stir all the seasonings into the veggies.
Pour the wine into the pan to deglaze, scraping up all the browned bits from the bottom of the pan as the wine bubbles. Let the wine reduce down until most of it has evaporated or been absorbed by the veggies.

Add the meat and any drippings back to the pot. Pour in the stocks and top with enough water to cover the meat and veggies about about a half an inch. Bring the stew to a boil, then reduce the heat to very low.

Cover the pot and let it simmer for 1 hour. Add the barley and cook for another 45 minutes or so until the barley is cooked and the meat is almost falling apart (check by piercing it with a fork or knife. There should be no resistance and the meat should flake apart with pressure). Taste the soup and add salt and pepper as desired. 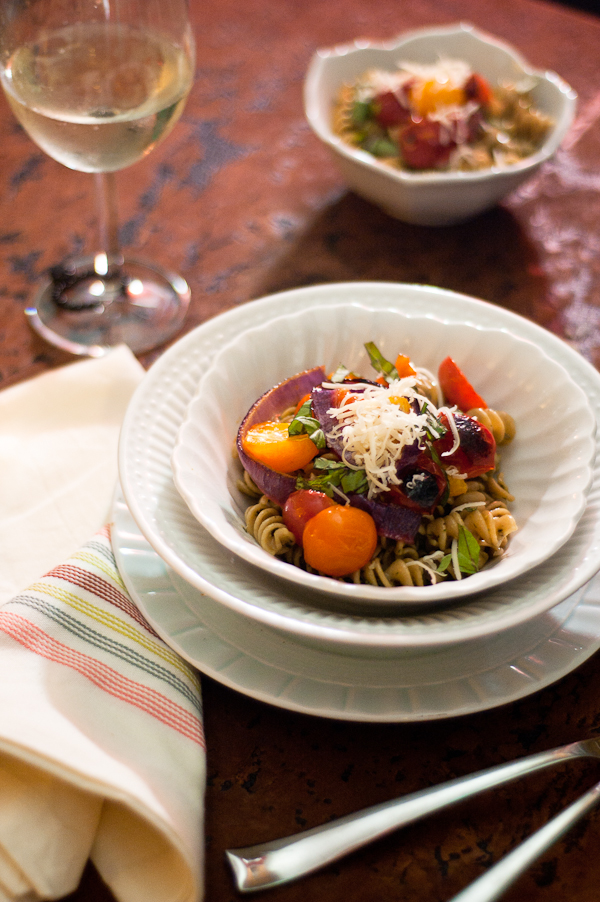 Summer tomatoes are in abundance and so are recipes to devour these delicious Summer treats. This recipe comes from Martha Stewart. It’s not really a recipe but rather an idea for a quick dinner. 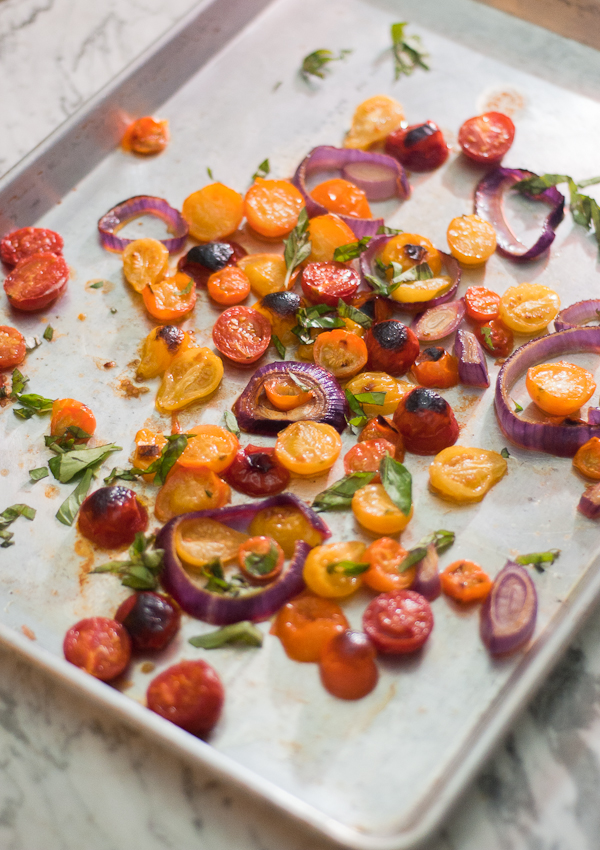 Lightly tossing cherry tomatoes with big wedges of red onion in olive oil and salt is all it takes to get this dinner started. Broil the tomatoes for five minutes and toss with cooked pasta and a little pesto and you’re done. I like to add slices of fresh basil since it’s growing almost wild in my garden. Top it all of with a little cheese and dinner is served. 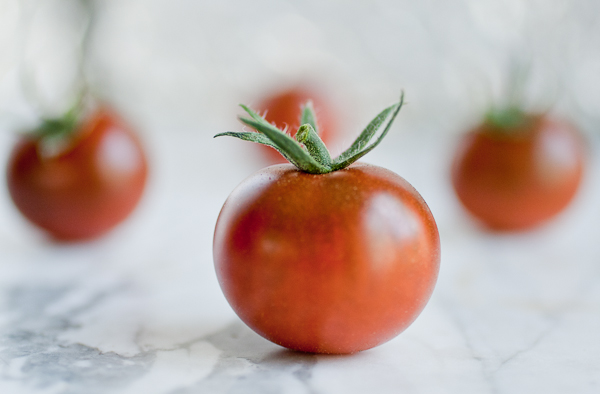 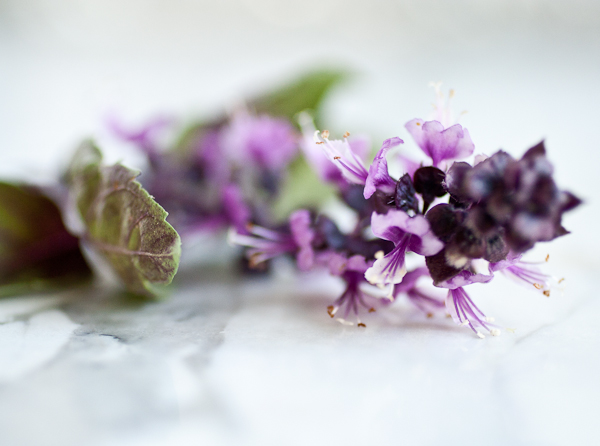 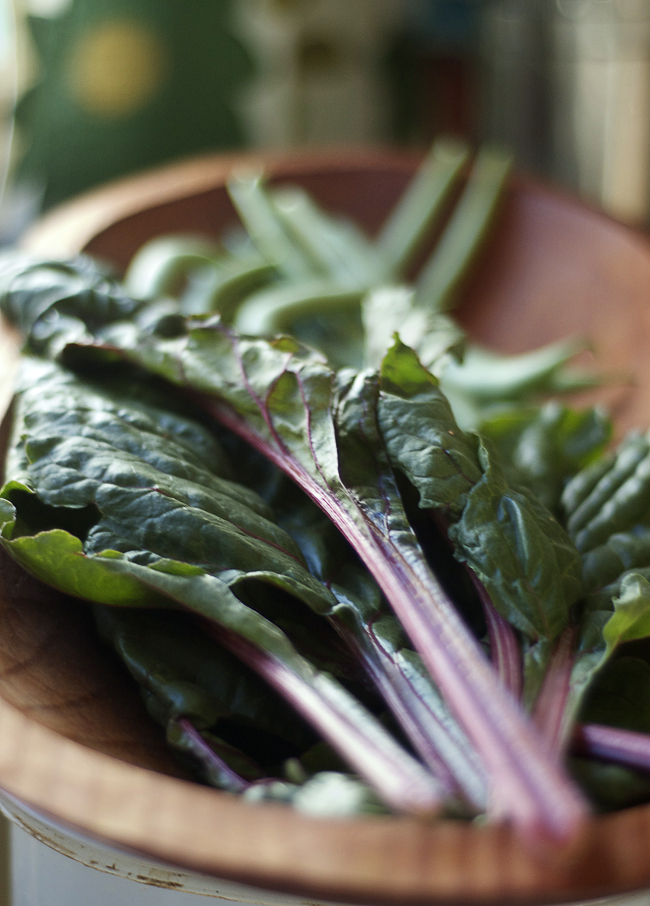 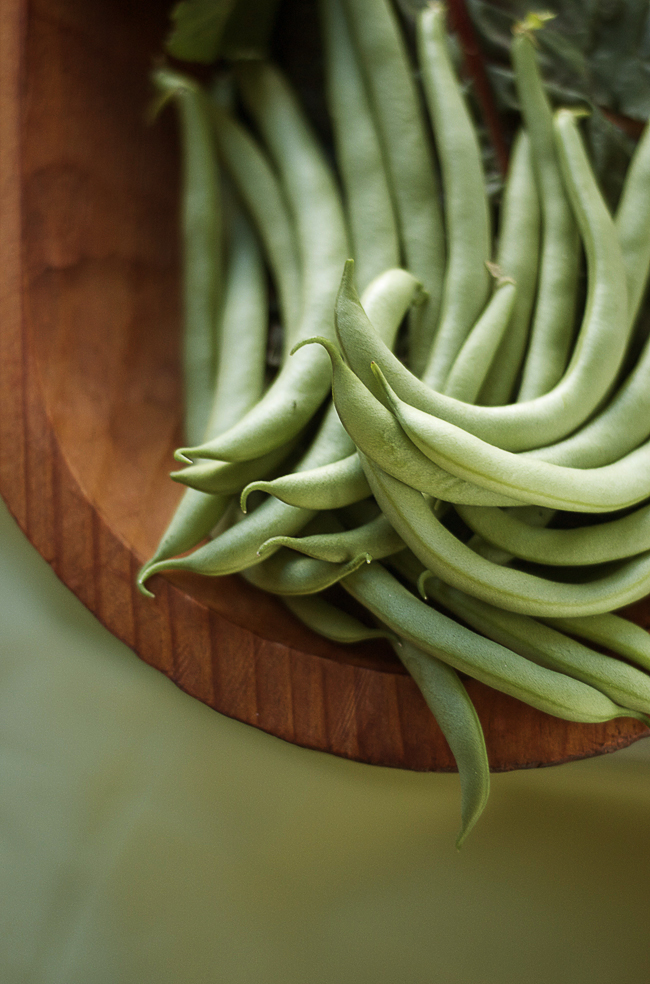 Now that I’m finally harvesting my small garden plot, string beans and swiss chard are making a regular appearance at the dinner table.  I saute both in minced garlic and a little kosher salt.  No recipe needed.  Just toss all ingredients in a little olive oil and saute for a couple of minutes. 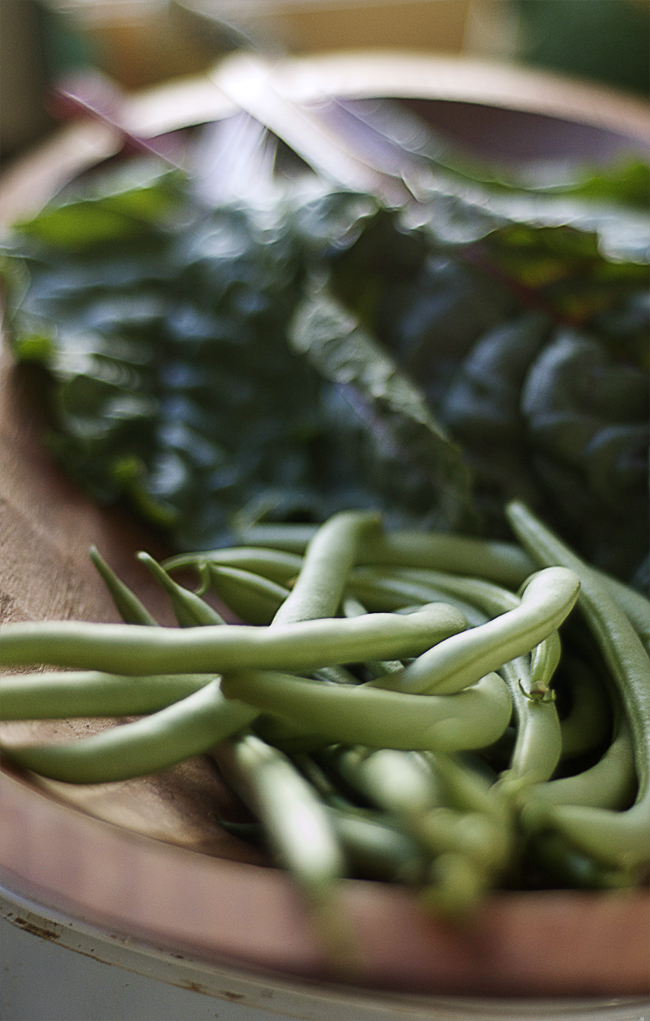 These images were really fun to shoot, especially because I was really happy with the close up shot of the beans.  I spent a good 5 minutes styling the beans so that they looked effortlessly tossed into the wooden bowl.